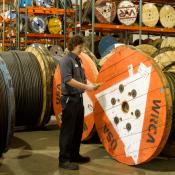 With each application, your choices of wire ropes can be many. How do you know which one works best for you?  Ropes include a combination of characteristics that give them specific performance abilities. Before you choose, it pays to look closely at each rope’s special characteristics.

No single wire rope can do it all

The basic characteristics of wire rope

How do you choose the wire rope that’s best suited for your job? Following are the most common characteristics to be considered when selecting a rope for an application.

Wire rope strength is usually measured in tons of 2,000 lbs. In published material, wire rope strength is shown as minimum breaking force (MBF) or nominal (catalog) strength. These refer to calculated strength figures that have been accepted by the wire rope industry. When placed under tension on a test device, a new rope should break at a figure equal to – or higher than – the minimum breaking force shown for that rope. Certain standards allow for an acceptance strength that is 97.5% of the nominal strength to allow for testing variables. The values in this handbook apply to new, unused rope. A rope should never operate at – or near – the minimum breaking force. During its useful life, a rope loses strength gradually due to natural causes such as surface wear and metal fatigue.

Fatigue resistance involves metal fatigue of the wires that make up a rope. To have high fatigue resistance, wires must be capable of bending repeatedly under stress – for example, a rope passing over a sheave.
Increased fatigue resistance is achieved in a rope design by using a large number of wires. It involves both the basic metallurgy and the diameters of wires. In general, a rope made of many wires will have greater fatigue resistance than a same-size rope made of fewer, larger wires because smaller wires have greater ability to bend as the rope passes over sheaves or around drums. To reduce the effects of fatigue, ropes must never bend over sheaves or drums with a diameter so small as to bend wires excessively. There are precise recommendations for sheave and drum sizes to properly accommodate all sizes and types of ropes.
Every rope is subject to metal fatigue from bending stress while in operation, and therefore the rope’s strength gradually diminishes as the rope is used.

Resistance to metal loss and deformation

Metal loss refers to the actual wearing away of metal from the outer wires of a rope, and metal deformation is the changing of the shape of external wires of a rope. In general, resistance to metal loss by abrasion (usually called “abrasion resistance”) refers to a rope’s ability to withstand metal being worn away along its exterior. Resistance to metal loss reduces the strength of a rope. The most common form of metal deformation is generally called “peening”– since outside wires of a peened rope appear to have been “hammered” along their exposed surface. Peening usually occurs on drums, caused by rope-to-rope contact during spooling of the rope on the drum. It may also happen on sheaves. Peening causes metal fatigue, which in turn may cause wire failure. The hammering – which causes the metal of the wire to flow into a new shape – realigns the grain structure of the metal, thereby affecting its fatigue resistance. The out-of-round shape also impairs wire movement when the rope bends.

When a load is placed on a rope, torque is created within the rope as wires and strands try to straighten out. This is normal and the rope is designed to operate with this load-induced torque. However, this torque can cause loads to rotate. Load-induced torque can be reduced by specially designed rotation resistant ropes. In standard 6 and 8 strand ropes, the torques produced by the outer strands and the IWRC is in the same direction and add together. In rotation resistant ropes, the lay of the outer strands is in the opposite direction to the lay of the inner strands, thus the torques produced are in opposite directions and the torques subtract from each other. Depending upon your application, other wire rope characteristics such as stability, bendability or reserve strength may need to be considered.