Typical Evidence Of Wear And Abuse

Figure 1 is a “birdcage” is caused by sudden release of tension and the resulting rebound of rope. These strands and wires will not be returned to their original positions. The rope should be replaced immediately.

Figure 2 is a typical failure of a rotary drill line with a poor cutoff practice. These wires have been subjected to continued peening, causing fatigue type failures. A predetermined, regularly scheduled cutoff practice can help eliminate this type of problem.

Figure 3 is localized wear over an equalized sheave. The danger here is that it’s invisible during the rope’s operation, and that’s why you need to inspect this portion of an operating rope regularly.  The rope should be pulled off the sheave during inspection and bent to check for broken wires.

Figure 4a and 4b are wire ropes with a high strand – a condition in which one or more strands are worn before adjoining strands. This is caused by improper socketing or seizing, kinks or dog-legs. At the top, you see a closeup of the concentration of wear. At bottom, you see how it recurs every sixth strand in a 6 strand rope.

Figure 5 is a wire that has been kinked.  It’s caused by pulling down a loop in a slack line during handling, installation or operation. Note the distortion of the strands and individual wires. This rope must be replaced. 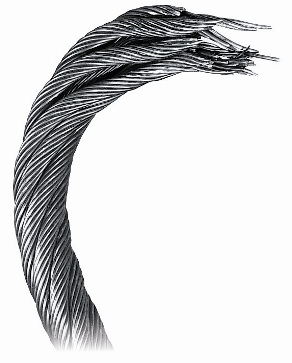 Figure 6 is a wire rope that has jumped a sheave. The rope “curled” as it went over the edge of the sheave. When you study the wires, you’ll see two types of breaks here: tensile “cup and cone” breaks and shear breaks that appear to have been cut on an angle.

A major portion of any wire rope inspection is the detection of broken wires. The number and type of broken wires are an indication of the rope’s general condition and a benchmark for its replacement.

Frequent inspections and written records help determine the rate at which wires are breaking. Replace
the rope when the values given in the table below are reached.

Valley wire breaks – where the wire fractures between strands or a broken wire protrudes between strands –
are treated differently than those that occur on the outer surface of the rope. When there is more than one valley break, replace the rope.

Broken wire removal criteria cited in many standards and specifications, like those listed below, apply to wire ropes operating on steel sheaves and drums. For wire ropes operating on sheaves and drums made with material other than steel, please contact the sheave, drum or equipment manufacturer or a qualified person for proper broken wire removal criteria.